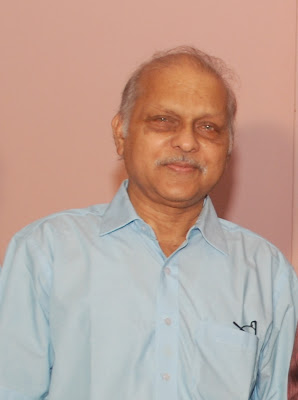 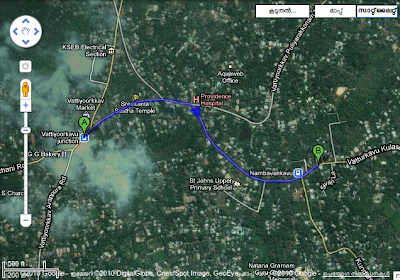 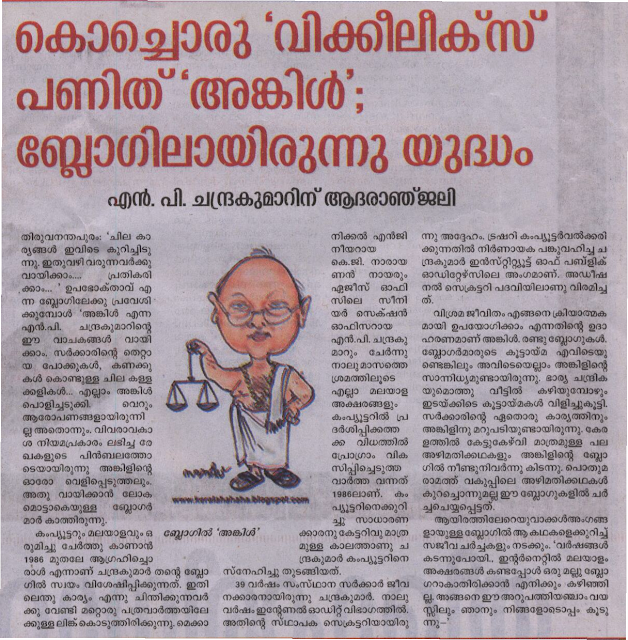 Posted by keralafarmer at 6:22 AM 6 comments:

The State Government has been spending vast amounts of funds for the periodic cleaning of the streams and rivers in Kerala to make them pollution free, without much success. The only way to keep all our waterways clean is to stop the inflow of dirty water from the houses through the drains and small streams into the rivers.

The next step is to introduce grease traps along all existing bathrooms, kitchens and washing places in each house and make this mandatory in towns and villages alike. Factories could be forced to use recycled plastics for the manufacture of these grease traps of different sizes and shapes and sell them in the markets. Plumbers could then fit these traps outside each house to stop the polluted waters flowing into the rainwater drainage systems.

These grease traps could be opened up regularly and cleaned by the occupants of each house. The food particles and other waste materials taken out of these traps can be used as fertilizer for the plants and trees around their houses. Factories should have traps of larger dimensions installed to limit the pollution of the water outflows.

A rough diagram of a small grease trap is attached, which could be easily mass produced in Kerala. By making such as system compulsory for each house, Kerala could become a model for other states to follow and the pollution of all our rivers and waterways could be greatly reduced in the long run.

Low income group house owners could improvise and make these traps with used plastic jerry cans to start with. This would be cost beneficial as well as a good way to use these used jerry cans which are currently being thrown out into rubbish dumps, as there are not sufficient accessible recycle facilities.

The outflows from the third jerry can in the grease trap shown below may also be used for watering the garden plants and trees. If charcoal is filled in the third can, the quality of water will be very good. The cans can be placed on the same level or on a sloping ground at convenient distances and connected with flexible pipe connections.

This filtering system would allow the waste water from our houses to be less of a pollutant in our waterways. 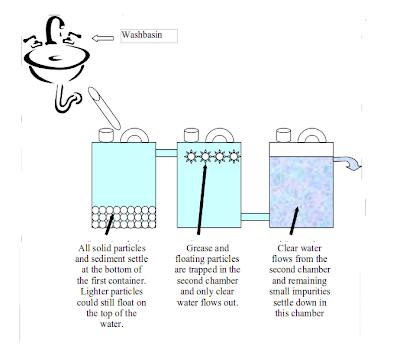 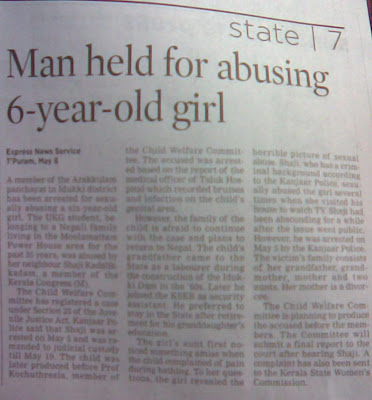 THIRUVANANTHAPURAM: A member of the Arakkulam panchayat in Idukki district has been arrested for sexually abusing a six-year-old girl. The UKG student, belonging to a Nepali family living in the Moolamattam Power House area for the past 35 years, was abused by her neighbour Shaji Kadalikkadam, a member of the Kerala Congress (M).The Child Welfare Committee has registered a case under Section 23 of the Juvenile Justice Act. Kanjaar Police said that Shaji was arrested on May 5 and was remanded to judicial custody till May 19. The child was later produced before Prof Kochuthresia, member of the Child Welfare Committee. The accused was arrested based on the report of the medical officer of Taluk Hospital which recorded bruises and infection on the child’s genital area. However, the family of the child is afraid to continue with the case and plans to return to Nepal. The child’s grandfather came to the State as a labourer during the construction of the Idukki Dam in the ‘60s. Later he joined the KSEB as security assistant. He preferred to stay in the State after retirement for his granddaughter’s education.The girl’s aunt first noticed something amiss when the child complained of pain during bathing. To her questions, the girl revealed the horrible picture of sexual abuse. Shaji, who has a criminal background according to the Kanjaar Police, sexually abused the girl several times when she visited his house to watch TV. Shaji had been absconding for a while after the issue went public. However, he was arrested on May 5 by the Kanjaar Police.The victim’s family consists of her grandfather, grandmother, mother and two aunts. Her mother is a divorcee. The Child Welfare Committee is planning to produce the accused before the members. The Committee will submit a final report to the court after hearing Shaji. A complaint has also been sent to the Kerala State Women’s Commission.

This may happen again...

I would like to share about a very bad experience happend to me on Sat night about 8:15pm (01-05-10) near to Kariyavattom junction(near techno park) in TVM.

I was on my way to have my dinner, hotel was near kazakkottam junction hence i caught a bus to get down on the desired destination, however i forgot to take my wallet so i got down from the bus paid the conductor the remaining change which was left in my pocket. On my way back to my room 3 people on bike suddenly rushed near me on bike pushed me down and started hitting me very badly.

Their intention was to steal money , while two persons were manhandling me one was frantically checking my pockets for money as they found that i have no money with me they left me lying on the road and rushed back to thier vehicle. I was badly hurt and my mobile was also broken. I some how managed to get back to my room and scared to inform police as this happend very near to my room and this may happen again...

I want our mangement to make sure that this message reaches everyone hear, alert and inform all to be cautious while coming out late in the evening.

By an enquiry through telephone I got a reply that in this case a complaint had been registered at police station Kazhakkoottam.
You can always call up the highway police at 9846100100 for help
Another post TECHNOPARK ENGINEER INJURED IN ROBBERY INCIDENT
Posted by keralafarmer at 3:40 PM 3 comments: